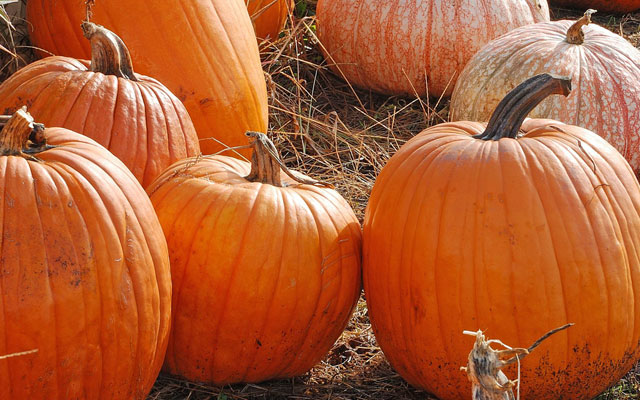 Think beyond pie—this squash is delicious in soups, pastas, pancakes, and more.

Pumpkins have been enjoyed by North Americans for centuries—they were a staple for Native Americans, who used them both for food and to make household goods, such as mats. Pumpkins also became a fundamental part of the English colonists' diet soon after they arrived. We tend to associate pumpkins with pie, but the colonists used them for soups, side dishes, desserts, and even for making beer.

It's no wonder early Americans used pumpkins so widely. They're not only tasty, but very nutritious. One cup of cooked, mashed pumpkin has 3 grams of dietary fiber and is loaded with vitamin A. It also contains significant amounts of potassium, calcium, and vitamin C. Try these recipes for some new ways to add this nutritious food to your fall menu.

Heat oil in a large soup pot or Dutch oven over medium heat. Add onion, garlic, and bell pepper. Cook until vegetables soften, about 5 minutes. Add corn, pumpkin, and spices (through black pepper); cook another 5 minutes, stirring frequently to prevent the mixture from sticking. Stir in the broth, reduce heat to medium-low, and simmer for about 20 minutes, or until the vegetables are fully cooked. Add the chicken and cilantro, and simmer another 5 minutes. Serve with a dollop of sour cream.

Note: Make this dish ahead; it's even better reheated!

In a medium bowl, stir together the pumpkin, cheese, sugar, salt, and nutmeg. Have a platter or baking sheet and a small bowl of water ready. Lay one wonton wrapper out on a surface. Dip your finger or a pastry brush in the water and moisten the edge of one half of the wonton wrapper. Place about one rounded teaspoon in the middle of the wrapper, slightly closer to the moistened side. Fold the dry side over so that the edges meet and the wonton wrapper is folded in half. Pinch the edges to seal. Repeat with the remaining wrappers and filling, laying the ravioli in a single layer on the platter or baking sheet.

Heat a large pot of water to boiling. Carefully drop the ravioli into the water and cook for 3 minutes. Drain ravioli. In the empty pot, stir together the broth and sour cream. Return the ravioli to the pot and gently stir to coat with the sauce. (Do this as quickly as possible to prevent the ravioli from sticking together.) Sprinkle with the parsley and serve immediately.

In a large bowl, stir together the flours, sugar, baking powder, salt, and spices. In a medium bowl, whisk together the milk, pumpkin, eggs, and oil. Stir the pumpkin mixture into the flour mixture just until combined.

Heat a nonstick skillet or griddle over medium heat and lightly brush with oil. Pour about ¼ cup batter onto the pan for each pancake. Cook until bubbles form on the tops and the bottoms are browned, about 2 to 3 minutes. Flip the pancakes and cook the other side until lightly browned. Repeat with the remaining batter. Serve with the topping of your choice.

How to Make Pumpkin Puree

Although canned pumpkin puree is convenient and good, you can easily make your own. Start by choosing a pumpkin meant for cooking, not carving. They're smaller than carving pumpkins and may be labeled "sugar pumpkins." Cut the pumpkin in half and scoop out the seeds, then cook it in one of three ways:

When the pumpkin is cooked, let it cool enough to handle, then scoop out the flesh and mash it or puree it in a blender or food processor.

Save Money on Fresh Fruits and Vegetables