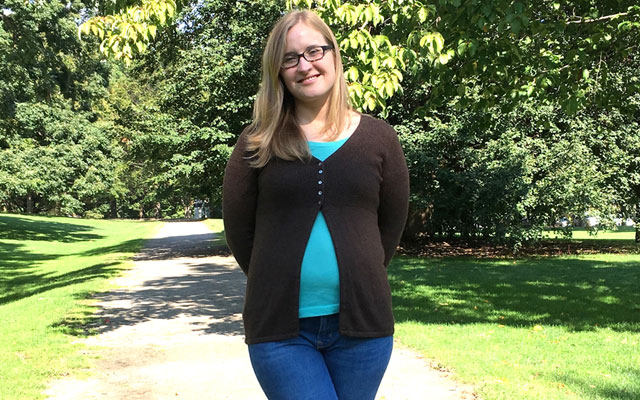 A New Path to Health

Meghan Andrikos’ struggle with depression and anxiety began more than a decade ago, when she was still in high school. In college, she began hurting herself. “That’s when I first talked to a counselor,” she said. “I was in counseling for a very long time."
In 2013, after having a baby, Meghan’s depression got much worse. “I had my beautiful son,” she said, “but I was at rock bottom.” She went to Butler Hospital, a psychiatric hospital in Providence, where she stayed for a month. When she was leaving Butler, her nurse told her about a new program called HealthPath, which helps people with serious mental health and substance use disorders transition from the hospital to home.

Before HealthPath was created, Meghan would have left the hospital and likely had several appointments a week, seeing a psychiatrist for her medication as well as a therapist. That could have cost her several hundred dollars in out-of-pocket costs a month. Also, psychiatrists and therapists often work separately, leaving Meghan to coordinate her own care. That’s difficult for someone who is seriously ill. It can end in a health crisis—and another hospital stay.
HealthPath is different. This team-based approach to care was created by a team: Blue Cross & Blue Shield of Rhode Island, Care New England, and Continuum Behavioral Health (which is part of Care New England). HealthPath is available only to BCBSRI members.
Instead of paying for each visit or service, BCBSRI members:
“Being able to provide such a wide range of services to Blue Cross members has a huge impact,” said Ian Lang, executive director of Continuum Behavioral Health. “We’re not limited to 45-minute appointments.”
Ian said that HealthPath also has peer specialists who have experience with mental health issues and substance use disorders: “Some of them have made unbelievable breakthroughs with people no one else can get through to.”
For Meghan and many others, HealthPath has changed their lives. “It was amazing how everyone was in the same place and on the same page,” said Meghan. “I had a lot of people to talk to, and that’s the biggest thing for recovery. Depression is scary, for me and for other people out there. But the more people talk about it, the less scary it is.”
Meghan said she’s accepted that managing her health will be an ongoing process. “With depression, a big part of me wants to check out, but I want to be a part of my son’s life. My family and HealthPath have made a world of difference. I can’t imagine not having that.”

The proven value of HealthPath

After a Scary Diagnosis